This blog is going to be a double whammy with two separate drone videos as in this case there are two structures of interest, a 15th century castle and an 18th century country mansion. I really enjoyed going out to view these structures hidden away in South Ayrshire and I really hope these buildings get taken on to be preserved for future generations to enjoy.

Dalquharran Castle consists of a ruined 15th-century tower with a 17th century extension which has been enveloped by nature. A newer country mansion was constructed around 1785 which is located around 300m northwest away from the river. This is also known as Dalquharran Castle, for the elimination of confusion I will refer to this as Dalquharran Country Mansion. Both structures are fairly intact but have not been made safe so any visitors must do so with caution. Below is a google maps image showing where the two structures are in relation to one another. 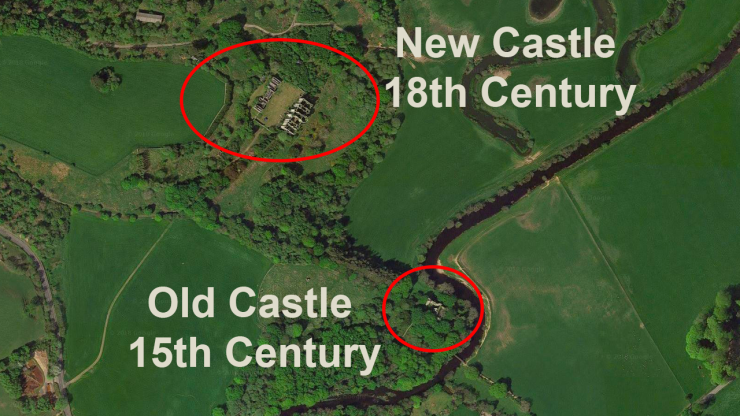 Dalquharran Castle has a few architectural details which differentiates it from many other tower houses with a circular tower at the southeast corner. A large extension which would have doubled the size of the castle was added in 1679. This extension included a new wing to the east and a circular tower in keeping with the existing castle. A new entrance was formed, above this entrance shows the date of 1679, a monogram and a Latin inscription. The inscription is purportedly a quotation from Buoncampagno de Signa’s Rhetorica Novissima of 1235 although with my internet research I could not confirm this.

The old castle and estate were bought in the late 17th century by Sir Thomas Kennedy of Kirkhill, Lord Provost of Edinburgh, and occupied by his son Thomas Kennedy of Dunure. Kennedy of Kirkhill also bought Dunure Castle of which I will also be uploading an article and drone video on in the near future. This brings us to the first drone video of Dalquharran Castle which gives an insight into the structure and shows the proximity between the castle and country mansion.

Dalquharran Country Mansion was designed by the prolific architect of the time, Robert Adam, and constructed around 1785. This became the main residence with a view out on to the old castle and the Water of Girvan. The country mansion is truly a sight to behold with the pictures and drone footage doing it little justice.  The mansion has four floors and is arranged symmetrically around a central entrance hall, with top-lit central spiral staircase. The buildings and boundary walls are littered with indented crucifixes. This design feature may have been inspired by Robert Adam’s five years of study in Rome.

As you will see from the pictures at the bottom of this blog, the design was incredibly symmetrical with top-lit central spiral staircase similar to Culzean Castle, which Adam also designed. There is a full basement level where the services were located. Many of the original features like the lath and plaster, the fire places and intricate window details are still in display.

Across from the mansion was a long more simple low level structure which connected at either end to the main building by screen walls with gateways, creating a forecourt. The mansion lay in ruins after the roof was removed to avoid local taxation in the 1960s which is tragically so often the case with historic structures.

As per Wikipedia, there was outline planning permission was granted in 1990 for a redevelopment, with two golf courses, a hotel, conference centre, country club, and hundreds of holiday homes. This ambitious project never materialised and further permissions since to convert the mansion have not followed through to anything, but there may still be hope for this structure. When I was out at Dalquharran Castle I met a chap surveying the area for a client who was interested in the building so there might be a chance yet for its revival.

I hope you enjoyed this blog post and drone videos, if you want to be kept up to date with new blog posts please subscribe by email to get notified of the most up to date posts. Also you can use the contact page to send feedback or get in touch for enquires. 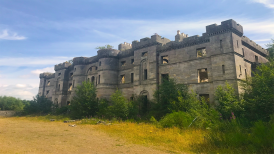 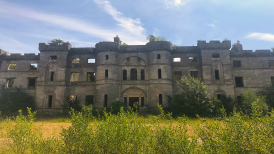 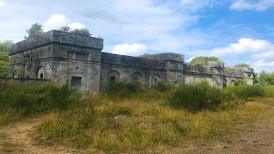 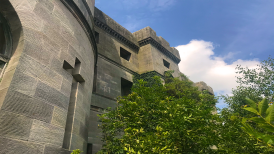 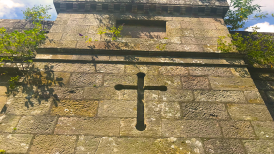